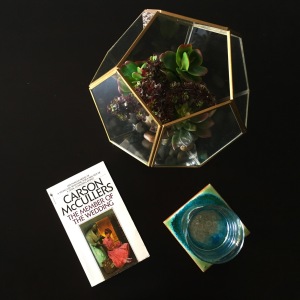 Frankie Adams’ late summer listlessness reaches a frenzy when her older brother comes home one day with a fiancée. The 12-year-old girl is right at the awkward moment where she doesn’t totally belong to the world of children or adults– that sense of disconnection launches her into a three-day exploration of her own identity as she looks for a place to belong in the world, and intoxicates herself in delusions of running away with her brother and his bride. Set against summer in the South, thousands of miles away from World War II’s battlefronts, The Member of the Wedding gives a brief glimpse into the mind of a lonely little girl who wants so much that’s mostly out of reach.

Girlhood! Only a few months back while reading Mara Wilson’s memoir Where Am I Now?, we went on a brief tangent over hummus about the dearth of tales of girlhood. And yet, here’s one. Frankie’s in flux– a girl with a crew cut in a frilly pink dress. She has thin ideas of what it means to be grown up, manifested through poorly applied lipstick, a dress she’s too young for, and an unsettling encounter with a drunk soldier. Despite those run-ins with gender norms, Frankie’s figuring out what it means to be Frankie, and that’s a good thing.

The Member of the Wedding was written in the mid 40s, so it lives at a point in time where the writing is completely familiar, but still slightly formal. McCullers’ writing style is descriptive and poetic, and she applies it to the illumination of not just the world surrounding the characters, but the worlds in their heads. And in this case, that means Frankie and every feeling that swells and deflates her heart while walking down the street.

Frankie is the main character, but most of her interactions are with a young cousin named John Henry West, and a nanny named Bernice. We meet other characters, like Frankie’s father and Bernice’s immediate social circle and, of course, the bride and groom, but they’re largely background characters.

There’s a scene involving a drunk soldier in a bar that made just about everyone shift around in their seats– but this is a Southern Gothic novel, after all, and it certainly sparked some conversation along the lines of “What the what was that??”

Is this a good discussion book?

I’d say yes. Discussion lasted all through dinner and sprawled over themes of identity, childhood, symbolism, and the merits of reading something that might make you uncomfortable. Plus, it spurred conversation about our own experiences growing up, which added a nice personal element to the meeting. I interpret that as a sign that we almost all connected with it on some level as women who grew up in the South (sorry Tim).

At some point in recent memory, Southern food got unrelentingly hip– think mac and cheese that actually costs a fair bit of, well, cheese. 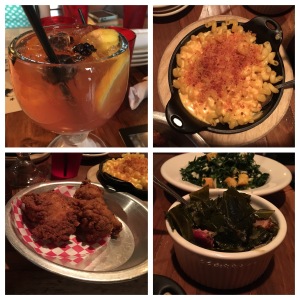 he kind of food a lot of folks down here grew up eating. But you know what? We’re solidly into it.

For the most part, we each got The Eagle’s fried chicken– which was crispy, juicy and flavorful– and with military precision, divided and conquered the sides menu. Our spread of mac and cheese, horseradish mash potatoes, grits, biscuits, and collards was enough to prompt people from a neighboring table to come over and ask us for advice. The Eagle also has a respectable craft beer menu, including some nearby offerings, and cocktails like bourbon punch garnished with berries and served in a glass that resembles a small birdbath.

Our waiter was incredibly good humored as our party of seven settled in and plotted how to try as much on the menu as possible. He was attentive, funny, and patient.

The interior of The Eagle plays into the mixed materials trend of wood and metal. It’s cozy and dark without causing vision problems, and split primarily on two floors, with a few smaller elevations in between. We were lucky enough to just about take over the second floor.

Being on the second floor afforded us not only adequate space, but insulation from the pre-dinner-rush din. We could hear each other talk without issue– and more importantly, hear that request to pass the mac and cheese.

Erin is a reporter who enjoys collecting vinyl records, wandering through airports, and rage-watching HGTV. Her favorite book is The Great Gatsby. She keeps a spreadsheet of every concert she's ever attended. View all posts by Erin Carson

The Monstrous Regiment is a book club stationed in Louisville, KY.